The epic journey set out on the first of October, 2018. The trekking party consisted of Pat Missin, Ray Grieve and myself. We were in search of a gold nugget. Just as George Leavis Allan had done in 1853 when he took out a gold licence (#88) and went prospecting at Campbell’s Creek. George would go on to build Australia’s largest music house, Allan & Co in 1877 at 276 Collins Street, Melbourne. In 1902 they would sell their own brand of harmonica called ‘Crackajack’ to rival their Sydney counterpart Alberts, who had already established a successful brand called ‘Boomerang’. The ‘Boomerang’ brand were manufactured in Germany by Seydel. Our gold nugget would be to find the manufacturer of the ‘Crackajack’ harmonicas.

Ray Grieve had it on good authority (Kurt Jacob) that F A Bohm were the likely culprits. However, Ray had found indisputable evidence hard to come by. A book on the history of Allans had made no mention of their harmonica line and descendants of the Allan family had no knowledge either. Pat had assumed it was Seydel as the big harmonica collectors of the world had labelled them such. One collector from San Diego, John Whiteman had them listed in his comprehensive anthology this way. Pat asked John if he could backtrack on how this information was derived. John obliged, but found no evidence for this decision.

Where to next? Pat ventured to the world of Trademarks, a place he was familiar with. He uncovered a mine of information relating to Australian harmonicas, but nothing that helped us in our quest. He kept digging. He was nearly down under when he came across a Trademark for the ‘Crackamonic’. Alas there was no extra information and a default date had been given for its registration (Monday January 1, 1900). Ray was excited by the find as Nellie Collier had told Ray of a ‘Crackajack’ Chromatic, but he had never seen one. “I’m stoked! I was never able to see a ‘Crackajack’ Chromatic I couldn’t source one not even a photograph for my book. This shot of the ‘Crackamonic’ is a first for me” (A picture exists in John Whiteman’s’ anthology). These were on sale in Australia in 1938 but with the onset of war and because they couldn’t compete with the ‘Chromorgan’ by Alberts, they disappeared as quickly as they arrived. 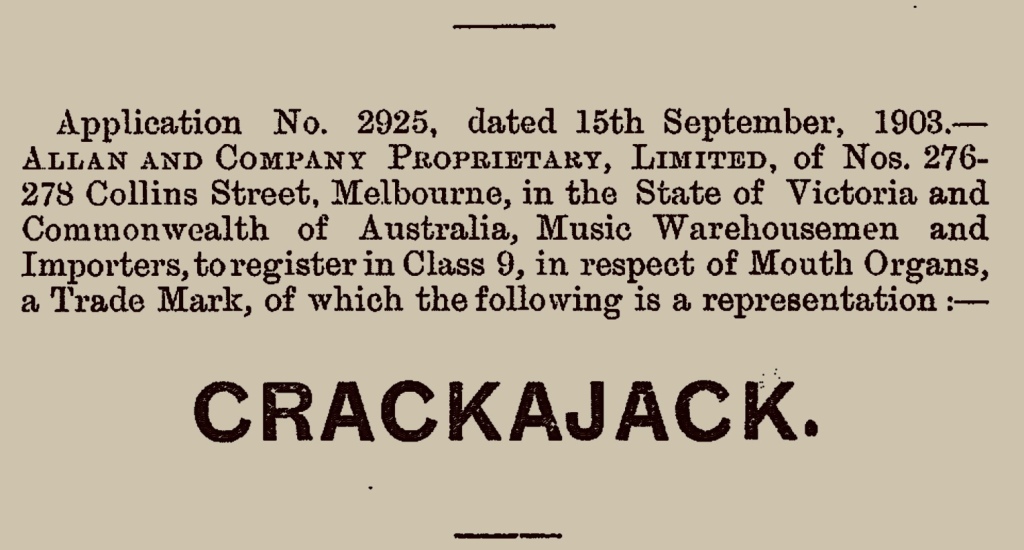 I decided to go surfing, nothing like an early morning surf down on the Mornington Peninsula at the breaks of Gunnamatta. No it wasn’t that type of surf it was of the information highway and would you believe it I discovered the patent for the name ‘Crackajack’ in of all places a supplement to the Western Australian Government Gazette of 1903. This was no nugget, but as this was Allan’s personal Trademark it was unlikely these harmonicas would have been made by Seydel as they held all the Trademarks for Albert’s ‘Boomerang’. We delved further into Ray’s book, ‘Boomerangs & Crackajacks’. There was the ‘Bonzer’, a ‘Perla’ and the ‘Rozella’. Nellie Collier had mentioned the ‘Bonzer’ to Ray. He discovered an advertisement for the ‘Bonzer’, but no other information presented itself and Pat couldn’t identify any trademarks either. It was the same result for the ‘Perla’. The ‘Rozella’s’ cover plate was of some interest and especially alongside a photograph of a 1927 ‘Crackajack Junior’ which I had forwarded to Pat. Could this be the lead we were after. He remarked, “… one thing has struck me over the past few days. When you look at the ‘Boomerang’ models with their fluted covers, the two flutings do not meet in the middle of the cover. This is how Seydel did the flutings on the covers of harps they made under their own ‘Bandmaster’ brand. As best I can make out, the ‘Rozella’ has similar flutings. Bohm made at least one harmonica with similar covers, although I can’t find any photos online. This design was registered by Seydel in the late 1800s and they got rather annoyed at imitations of it. They ranted a little about it in one of their catalogues and I have an article from a German music trade magazine from 1928 that talks about the alleged infringements, but sadly it does not name the accused infringers. However, looking at the fluted “Crackajack” covers, the two flutings run into each other to form one continuous channel. I don’t know if they are all like this, but this is quite different from the Bandmaster/Boomerang shape”.

There were several more days of frustration. The ‘Jazz Master’ which was sold by Allan & Co as a temporary stop gap measure just before WWII could be another line of inquiry. It too would be a dead end. Then suddenly quite by accident on the 24th of October while working on another project Pat tripped on a golden nugget. This is what he found, “It’s been bothering me that whilst many companies copied the Seydel ‘Bandmaster/Boomerang’ fluted covers (so many that Seydel felt obliged to take action), the ‘Crackajack’ fluted cover is noticeably different. Then I stumbled on this photograph of F A Rauner’s ‘World Master’. It is very similar, right down to the hatching on the embossed name and the engraved scroll-work that frames it. I can’t be certain without having actual specimens in my hands, but these really look like they came out of the same factory. I haven’t seen anything by Bohm or Seydel that matches the ‘Crackajack’ design like this one”.

There was no doubt about it F A Rauner’s ‘World Master’ has the same cover plate. In fact in 1929 due to the recession and Hohner buying out smaller harmonica manufacturers, Rauner, Seydel and Bohm merged. Interestingly Rauner was the first named and the manufacturing operation was out of Rauner’s Klingenthal factory. The amalgamation didn’t last long folding a few years later in 1933. F A Rauner was a big exporter overseas, they even made the Babe Ruth harmonica bat for the World Series of 1927. F A Rauner when blowing their own trumpet, or should I say mouth organ, said they were the second biggest manufacturer in the world (well least they didn’t say they were the largest). The ‘Scorcher’ a popular model of harmonica in Australia in the 1890’s had also been manufactured by F A Rauner.

So there it is, our quest for the maker is completed. With a high level of confidence I can conclude that F A Rauner were the manufacturer of Allan & Co’s, ‘Crackajack’. I think!

Special thanks to my fellow trekkers Pat & Ray. You can find their websites here http://www.patmissin.com and http://www.bushlarkmusic.com. They can take four bob out of the till and get themselves a cigar.

PS: I have derived a wealth of information from this journey and I plan to share this with you in upcoming Blogs. Next in line as a follow up to today’s is, ‘Collingwood’s Crackajack Collier’.

3 thoughts on “Quest For The Maker”