Mike Stevens first appeared on my radar when he collaborated with fellow Canadian, Matt Andersen on the 2009 album, ‘Piggyback’ (released on local independent label Busted Flat Records). ‘Blue Celtic Rose’ was a particular favourite of the authors as it featured his inimitable harp playing.

Mike’s unique style was suited to, but not exclusively to, Bluegrass music. In his words the harmonica was the “pneumatic fiddle” for this genre. Mike started to develop his individual technique as a six year old after finding a harmonica lying around the house. He had never heard any harmonica tunes or riffs, he would just play how he was feeling. 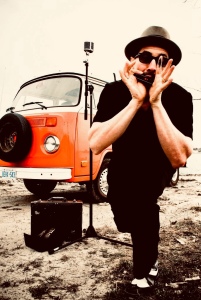 Mike was an extremely fit athlete, who at one time was training for a relatively new competitive event called the ‘Ironman’, a test of endurance in the disciplines of swimming, cycling and running. In fact he had qualified for the Hawaiian Ironman when he suffered stress fractures of the leg from training which would force him out of the event. This injury pales into insignificance for what he endured through blowing the ‘Bluegrass Burger’. It reads like a horror story and it may suggest to a harmonica player to be careful when speed playing. Mike has pushed his intestines out through his stomach wall on at least five occasions. He is sewn up with seven rows of stainless steel on both sides of his hip to his groin. There are problems with overdeveloped muscles in his neck, so much so that his throat clicks when he rotates his head. The jaw socket on his right side has worn away and if that’s not enough he continuously pops out a top rib when expanding his lungs. Who said playing sport and the harmonica was safe?

I want to examine a personal favourite tune of Mike’s called ‘Big Pig Jig’ from his 1999 album, ‘Colin Cross’. There is an alternative version entitled ‘Electric Pig Jig’ as well. The tune evolved from an experience Mike had while having a day off in Mexico. He ventured out to experience the cultural offerings and to sample some of the local product. After maybe too much indulgence he found himself on top of a restaurant roof with his arms enveloping a big pig statue which gave way sending him hurtling to ‘terra firma’. After several chiropractic visits later a song was born.

The harmonica is in the key of ‘C’ and I’ve posted a quick riff lesson on Soundcloud of the fast three note pattern. Hear here ‘Big Pig Jig’ Riff Lesson. Perhaps I should have said a two note pattern as it uses the two draw and three blow which on a Richter tuned harmonica is the same note and on a ‘C’ harp that note is a ‘G’. The blow three has a softer intonation to it than the draw two and it also enables you to blow out some air. The blow three, draw two was often used by Sonny Terry in his rhythmic chugging patterns. I use a lower jaw flick that helps when playing at speed. Without moving holes with your embouchure it is just a lateral movement of your mandible (lower jaw). Charlie McCoy and Buddy Greene are amazing exponents of this technique.

I know you Riff Raffers are interested in the harps used by different artists and Mike Stevens in the main uses Hohner Marine Bands that have been set up by Joe Filisko. The wooden comb is laminated and are sealed tighter than straight out of the box. He has recently discovered Hering Blues Harps that have thick reed plates which enable greater volume. They are reasonably air tight and are quite good for overblows and overdraws. I’m not sure Hering is still in operation.