It was the summer of ’63. The venue Flinders Street Extension outside the ‘Mission for Seaman’. A fifteen year old boy from Hampton was hitching to Torquay for some surfing. His lift to the city couldn’t take him any further and as he alights from the passenger side into the street he is impacted by a passing car. His injuries include a broken leg which would see him in hospital for six weeks. The boys name, Ross Andrew Wilson, Mr. Eagle Rock himself. Fortuitously this was the catalyst for Ross’ journey with the ‘Blues Burger’.

With his leg in traction Ross would listen to his ‘trannie’ (radio) by his hospital bed side. It was here that he heard Beatle John Lennon’s mouth harp on ‘Love Me Do’ and Brian Jones blowin’ on Rolling Stones tunes and this would inevitably lead to his attraction to the instrument that fits in your pocket.

Convalescing at home Ross asked his Dad if he could buy him a mouth organ instead of records. Mr. Wilson obliged and bought a Hohner Super Vamper from the Lewis Music Store in Russell Street for 2s 6d (25 cents). The store is still there today. Ross also had inspiration from a compilation record of ‘Excello’ artists which included Slim Harpo and Lazy Lester. He had a pretty good ear which enabled him to copy riffs. He finally returned to school in Term one of 1964 and in Ross’ words, “By the time I got back to school I was actually blowin’ a few good notes”.

With the plaster removed it was time to apply his craft in a band and with the help from friend and neighbor Keith Glass (Com-Pact) this was achieved. Keith’s band, ‘The Rising Suns’ played at a local church and would allow Ross to sit on on a few numbers like ‘King Bee’ and play his harmonica, son. It would be here that a twelve year old guitar prodigy, Hanna (Ross Hannaford) became enamoured with this cool kid playing harmonica. Hanna had played with his band earlier in the night. He asked Ross to come to their next rehearsal and he dutifully obliged. By the end of the session Ross had replaced the lead singer. This band would eventually be the ‘Pink Finks’ who would then evolve into ‘Daddy Cool’ who would record Ross’, ‘Eagle Rock’.

Ross developed his harmonica style around his Dad’s jazz records. I’ll let him explain, “Because I was brought up in a house where two things were happening. One was my Dad had lots of Jazz recordings and he would spend Saturday mornings working around the house listening to these records. So I heard plenty of improvisation. The improvisation idea was also there with guitar solos and saxophone solos on rock and pop songs. It was never a mystery to me to go and take a song and mess around. You don’t have to play it exactly.” Ross’ harmonica style progressed where he played a lot of chords rhythmically including split octaves, rather than single notes. He would play his own style, but borrow riffs from Lazy Lester and Howlin Wolf. On Howlin Wolf, Ross remarked, “On nine out of ten solos he would play the same solo, but it always sounded fresh, it’s like a zen thing. It sounded simple, but very difficult to copy. So he had this thing of his own. That’s the key.” Ross developed his chordal technique around Howlin Wolf’s. 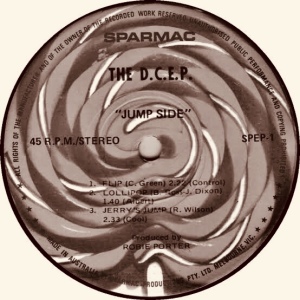 Ross’ band Daddy Cool possessed three cracker originals all around this specific guitar ‘A’ chord riff where the little finger is extended to the fifth fret on the top E string, Eagle Rock, Come Back Again and Hi Honey Ho. However, the band originated primarily from their Doo Wop tunes that featured heavily in their sets. Songs like ‘Gee’ and ‘Cherry Pie’. On their ‘Lollipop’ extended play they covered Marvin and Johnny’s hit, ‘Flip’ with the harmonica right there in the foreground. The song was written by Cal Green, who was the original Johnny (Marvin didn’t think Marvin and Cal had much of a ring to it). There were a few other Johnny’s after Cal just to confuse the issue. On the Daddy Cool recording Ross steps in with the harp where Marvin Phillip’s tenor saxophone would have appeared on the original. Ross loved the tenor saxophone especially Lee Allan (Fats Domino) and Joe Houston (Big Joe Turner) he would mimic their lines on the harp. Ross stated, “The tenor saxophone was my favourite instrument. I tried to play it, but it was too hard.”

I have posted a live recording of Daddy Cool performing ‘Flip’ at the ‘Whiskey A Go Go’ in Los Angeles where they opened the bill for the Elvin Bishop Group back in August 1971.

A new Riff Hits & Bits is also up with Steve Cash once again playing the Tennessee Triller. Hear here https://soundcloud.com/sheppa59/union-mare-waylon-jennings-steve-cash.

A CD arrived in the mail this week of some note from Altona recording label ‘Belmar Records’. The Pearly Shells, Melbourne’s best swing, jazz R & B band have a new album entitled, ‘Went Down Swingin”. Have to say track five, ‘Rubygil’s Bar And Grill’ written by Steve Purcell has a bit of a Daddy Cool flavour to it. Check it out here http://thepearlyshells.com