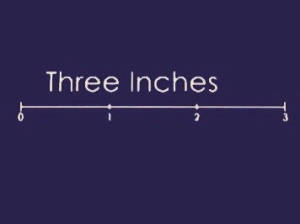 In following up on our May article on mini moothies (four and five holes) that weighed in at one and three eight inches, here is a quick peek at the small ten holers. The standard diatonic is commonly four inches in length, while the Junior models that many brands supplied were usually a wee bit under this. What we’re talking about here is those that are three inches (or close to) big!

Albert’s produced the Pocket Boomerang that measured close to three inches in 1908. This one pictured (I imagine) tuned to a high ‘G’ measured 7.7cm (3.03 inches). It was reported in The Braidwood Review & District Advocate (New South Wales) on the 21st February 1928, that legendary Aussie harpist P C Spouse may have been entertaining with this model. The ‘various kinds of articles’ that Percy could make music from included the kerosene tin, old boots, saws, bent metal, pipes, buttons, bones and a table knife to name a few. Percy was often advertised as a novelty musician and a mouth organ manipulator. Later he had his own autographed model on F A Bohm’s World Fame mouth organ series.

Allan & Co’s Crackajack brand advertised the Cadet model at one time as the smallest model pictured here in 1905. These Cadets were possibly smaller than those manufactured in later years which measured closer to four inches than three.

From 1906-12 the Little Gulliver was promoted as the smallest ten hole tin can Crackajack and this was half the price of the 1905 Cadet!

In their updated models of 1926/27 there was a Tivoli model at the bottom of the range selling for 1/6 – possibly a three incher. The fluted cover plate would not have pleased Seydel.

In 1915 F A Rauner makers of the Crackajacks had two big little harps for the world markets – The Pocket Harp and My Little One.

Speaking of Gulliver, F A Bohm in 1925 advertised three models of three and one eighth inches a World Fame, Piccolo and The Liliputian (with only one l for some reason). Slightly bigger than the Pocket Boomerang was Hohner’s Vest Pocket (first advertised in 1906) tipping the measurement scales at 8cm (3.125 inches). In the previous year Hohner had advertised a Piccolo model. I’ll come back to these two models later as they shared the same model number and similar packaging.

A number of harmonica manufacturers produced a generic line called the Piccolo that was three inches in length. Seydel who made the Pocket Boomerang produced a similar model under the guise of My Charm circa 1923. They stated the following in a note, “as the name of ‘Piccolo’ is not protected and may be used by any Manufacturer, a lot of rubbish has been put out on the Market under the same name. ‘Seydel’s Piccolos’ can always be relied upon as good class Instruments, and to distinguish them, some bear the Trade Mark, ‘My Chum’.” In 1926 Musgrove’s of Western Australia had in their Monarch (E Deinst?) range a small twenty reed Piccolo model mouth organ retailing for 1/6. 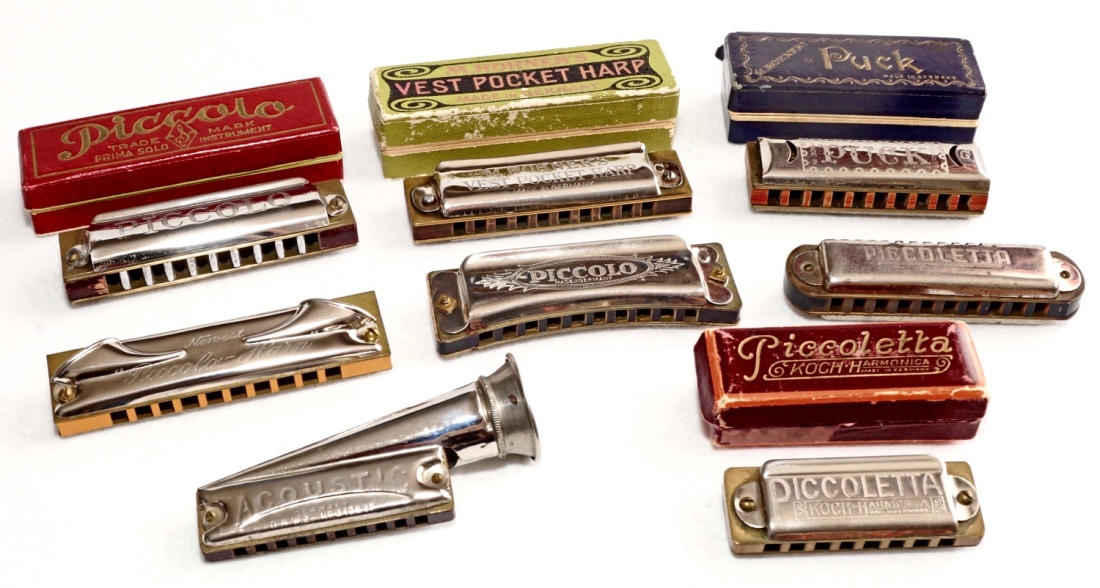 Pictured above is a range of small ten holers from collector and Riff Raffer, Doug Dawson. The smaller models ranged in key from a ‘Bb’ up to a high (I’m presuming) ‘A’. Interestingly the Schunk Acoustic with horn is even smaller than Hohner’s Puck if you removed the horn. Schunk Acoustic is 6cm (2.36 inches) harp with + 2cm horn and the Puck, in again a high ‘G’ tuning, is 7cm (2.76 inches). Also included here is Koch’s eight hole Piccoletta in the key of ‘A’ weighing in at 5.8cm (2.28 inches).

Gebr. Ludwig in 1936 produced this ten hole Zaunkonig (wren) – 6.6cm (2.6 inches). Is this the smallest ten holer thanks to the curved mouthpiece?

The standard diatonic is mighty fine for yours truly, however you might want to go bigger like Matt Taylor. 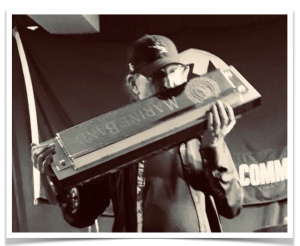 Oops! I nearly forgot. I promised to return to look at Hohner’s Vest Pocket and Piccolo models that shared the same model number 214 1/2 and very similar boxes. They were seldom advertised together in a catalogue although I found one in where the Vest Pocket was numbered 214 and the Piccolo as 214 1/2. In the thirties there was also a Piccolo Octave model number 3502/40 Knittlinger system harp (divided comb having two rows of ten holes), but it measured 10cm. 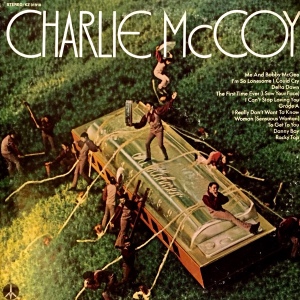 The Piccolo had a packaging change at some point with the hinged box having the same graphic as my Piccolo (below) which is in a rare push box. As a sidelight, Charlie McCoy quite often used a Vest Pocket on his albums to provide him with the upper octave. Toons like Hangin’ On he blew a Hohner Golden Melody and Vest Pocket in the key of ‘A’ and on Can’t Stop Loving You from his self titled album (with Lilliputian theme cover) he played ‘G’ tuned harps in the same manner. I’m reliably informed Charlie performed on the Vest Pocket with I Love You and Going To The Country from the Steve Miller bands 1970 album Number 5. Just two letters WOW! Another harp player Steve Miller teamed up (for thirty two years) with was the late great Phillip Jackson (Norton Buffalo), who is seen here in this video clip executing High Tide In Wingo on a Vest Pocket in the key of ‘A’ NB. Norton first played two tunes on Steve Miller’s 1977 Book Of Dreams album. Bit of a shame Hohner doesn’t produce these little wonders anymore as I am certain there would be a few professional players who would love to add this to their repertoire.

Hohner had another model on the market measuring the same size as the Vest Pocket and the Piccolo named the Hohner Band number 213 1/2.

Just in finishing, a well used and abused Vest Pocket sold at Sotheby’s auction house back in 2015 for £3000. A signed affidavit stated it was given to Jimi Hendrix by Bob Dylan to help tune his guitar.

Not too sure that Sonny Terry would have used this harp too often. I thought he was predominantly a low harp chugger on ‘A’ and Bb’ harmonicas, but if your looking for a cheaper Vest Pocket (used by a legend) there’s a ‘G#’ Vest Pocket for sale as part of Sonny Terry’s estate for $295. Apparently there was quite a range of harps in the estate including chromatics and tremolos.