Revisiting a tune with a catchy harp riff that’s having its thirtieth anniversary and is as good today as it ever was. It continues to mature like a single malt scotch whisky in an old oak barrel. 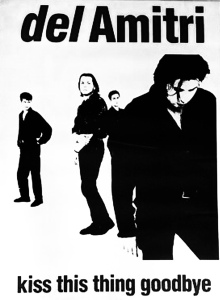 When Scottish group Del Amitri released their single ‘Kiss This Thing Goodbye’ for the first time the tune lived up to its title barely reaching the Top 60 charts in the United Kingdom. With the successful release of their second album, Waking Hours in 1989 (first self titled came out in 1985 to very little fanfare), the singles re-release went gangbusters and it was hello down under-here we are boys. The song would break the Top 30 in Australia and tours would follow.

‘Kiss This Thing Goodbye’ wasn’t atypical of the Del Amitri ambience, but instead had all the hallmarks of the American Country Rock genre (perhaps alternative as well, but I’m not sure on my genre classification regulations). The band had travelled the United States in 1986 driving around for twelve weeks with little money, busking and living with fan’s parents. It would be here that the new sounding Del Amitri would have it’s roots. Just on the name Del Amitri, Justin Currie the driving force behind the outfit claims it was meant to be meaningless and just a corruption of the Greek name Demetrius.

‘Kiss This Thing Goodbye’ is one of Justin’s all time favourites. He attributed this to the recording process handled by Mark Freegard and although it had been arduous the final product was just right. Harmonica Riff Raff has been fortunate in recent times to be in contact with Mark and also the man who blew the signature riff on the song, Julian Dawson. Here are their recollections. 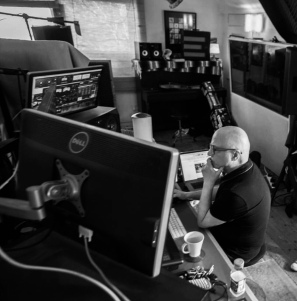 SD: The album Waking Hours was a long time in the making. How did you end up producing this ripper tune?

MF: ‘Kiss This Thing Goodbye’ had previously been produced by David Kershenbaum on album sessions for the Waking Hours album and scrapped (as were all the songs he produced for the album, with the exception of a ‘b’ side ‘Maggie Brown’). I’d been working with producer Hugh Jones as an engineer on re-recordings of ‘Nothing Ever Happens’, ‘Empty’ and ‘Your Gone’ when I received the call to come in as producer-I think due to Hugh’s commitment to other projects at the time.

SD: How did the recording session come together? Were there any issues?

MF: ‘Kiss This Thing Goodbye’, ‘Stone Cold Sober’ and ‘Opposite View’ were the first songs I attempted to record with Del Amitri at Great Linford Manor. I don’t think the sessions started well. We struggled with electric guitar sounds and nothing seemed to gel. I think out of desperation more than anything we took a more acoustic approach with ‘Kiss This Thing Goodbye’. We had painstakingly created a backing track of just drums and bass and had tried various electric guitar overdubs to bring the song into focus, but without much success. I think it was when Iain (Harvie) put down some dobro playing the slide riff you hear from the off, that the track started to come to life. From there on in things became much easier and the arrangement took shape relatively swiftly.

SD: Where did the idea for mouth harp on the tune arise?

MF: I’m not sure how Julian came to the session, but we had the idea that a harmonica bouncing off the guitar arrangement with a sort of call and response around the vocal might be a good thing. I remember Julian walking in as this impressive and towering figure (well I am pretty vertically challenged!) and opening an equally impressive suitcase that seemed full of every sort of harmonica possible known to man. We would have briefed him on the sort of approach we envisioned and then just let him do his own thing-probably over five to six takes. I would have comped/edited the best bits together as you can hear on the final version. One of his harmonicas was this incredible bass or baritone (?) enormous thing that produced a fat gorgeous sound. He plays this on the middle eight break (starts 2:47) and it really sounds to me like a baritone saxophone here. Such a wonderful texture.

SD: Is there anything else you’d like to add, perhaps looking back in retrospect, Mark?

MF: Just a few years later (when I worked in America for the first time) I picked up a hire car at San Francisco airport and on the journey across one of the bridges I fiddled with the fm radio, ‘Kiss This Thing Goodbye‘ came on and sounded brilliant! This seemed a good omen for the recording I was about to undertake-The Breeders EP ‘Last Splash’ and their single ‘Cannonball’, which did pretty well for them (and me). ‘Kiss This Thing Goodbye’ was a perfect album opener and Julian’s wailing harmonica on the intro sets things up beautifully, I think. This song is right up there on my list of successful production collaborations-a track I’m really proud of having some involvement. 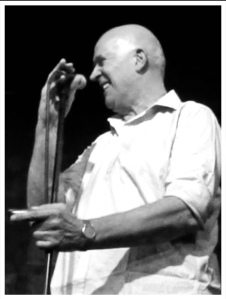 Julian Dawson plays the Blues Burger on the tune. He uses a harmonica in the key of ‘C’ playing in second position. The song has nice step down modulation (key change-down) to ‘F’ from ‘G’ and Julian changes to a ‘Bb’ harp to continue blowing in second position. Here’s Julian’s take on the recording session.

SD: Del Amitri’s ‘Kiss This Thing Goodbye’ was really popular here in Oz, Julian. How did you happen to blow harp on the tune?

JD: I got the gig with Del Amitri via Will Mowatt who did some keyboard work on the album and was a friend of mine in the London session world.

SD: Where did the recording take place?

JD: They were working with Mark Freegard in a residential studio somewhere in the countryside in England. It remains one of my favourite sessions.

SD: How did harp end up on the tune and how did the riff evolve?

JD: I played on a couple of tracks, but only ‘Kiss This Thing Goodbye’ made the album. It was pretty well left up to me what I played and they took my first take, which was gratifying. It all went fairly quickly. I changed the key for the solo and played a rhythm part on the outro nicked from a Jackson Browne album, played by Jimmie Fadden from the Nitty Gritty Dirt Band-they faded that bit.

SD: On the songs video clip Justin is miming the harmonica part on a Hohner Super Chromonica. What’s the story there?

JD: When Justin mimed to my performance in the video it caused a bit of a stir with the Musician’s Union and I received a pretty substantial second fee for doing nothing…obviously I’d have preferred to have appeared in the video.

SD: What was your initial reaction to the finished product and do you still see Justin?

JD: It was great to hear it on the radio when it came out and I was amazed that it wasn’t a big fat hit. I really love the song (and the album it’s on), but have only seen Justin once or twice since. I played ‘Kiss This Thing Goodbye’ live with him when he played a gig near where I live a couple of years back. It was an excellent show and I really like him and his music.

SD: What are you up to these days Julian?

JD: If you want to check out my own music you can have a look at my website. I’ve played harp for Gerry Rafferty, Little Feat, Plainsong, Iain Matthews, Charlie Louvin and lots of others, quite apart from my main job as a singer songwriter. 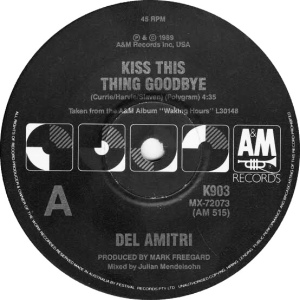 “Now I’m watching the fumes foul up the sunrise.

I’m watching the light fade away

and I’m hoping tonight that I’ll open the door

and you’ll stand here and say.

So come on Babe, let’s kiss this thing goodbye.”

PS: Thanks to Julian and Mark for their time and information. Check out Mark’s webpage here Kyoto.