Hohner, a world leader in accordion and mouth organ manufacturing, had its share of difficulties in becoming one of the major players in the Australian Mouth Organ market in the early part of the twentieth century. Most models were available in the colonies and they included the popular ‘Up To Date’ and ‘Second To None’ mouth organs. However, Albert’s ‘Boomerang’ and Allan’s ‘Crackajack’ Australian flavoured mouth organs were streets ahead of the field. At the turn of the Century a commemorative model was produced by Hohner for the local market branded the ‘The Federation Souvenir- Century Advance’. In 1912, to further tap into nationalistic fervour and compete with their rivals, a mouth organ with an Australian identity the ‘Young Australia’ was introduced in two models-one for 1/3d and another for 2/- and they achieved promising sales.

A stumbling block to sales occurred in 1928 with a possible violation of Trademark regulations of Hohner’s ‘Young Australia’. The Australian Natives Association (where there were no indigenous Australians allowed) brought to the attention of the ‘Pollies’ of the day that the Australian flag was stamped on the instrument alongside ‘made in Germany’. The A.N.A had formed in 1871 in Melbourne by patriotic white men born in Australia who believed in a White Australia policy. They were heavily involved in the political processes of the time and in particular the federation of the colonies.

Then Federal Attorney General Mr. J.G. Latham proclaimed that, “The Trade Marks Act, 1905-19, section 18, provides that the Registrar may refuse to register any trade mark which contains any representation of the Flag of the Commonwealth. This section applies only to the registration of trademarks. Section 113 prohibits the use in connection with any trade, business, calling, or profession of the Royal Arms without the authority of the King or some other proper authority. This section does not apply to the Australian Flag. Section 114 (a), however, provides that the Governor-General may declare any mark to be a prohibited word or mark, and may also declare that that mark shall not be used or registered as a trade mark or part of a trademark. Under this provision it would be possible for the Governor-General to prohibit the use of the Australian Flag as a trademark, but the proclamation would have to be in general terms and could not under this provision be confined to goods of foreign origin. The Government is not prepared to prohibit the use of the Australian Flag in connection with all goods.” (Perth Daily News, 28 March, 1928)

This, and maybe with lingering resentment of Germany’s involvement in WWI (don’t mention the war) the ‘Young Australia’ was removed from the shelves. 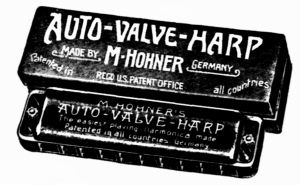 In the 1930’s with the proliferation of mouth organ bands Hohner once again attempted to land a foot hold in the Australian market. They would promote the ‘Auto Valve Harp’ as an Australian model even though it had been sold internationally since 1910. Ray Grieve, Australian Mouth Organ historian, had been informed of this by Kurt Jacob who was sent ‘Down Under’ as Hohner’s representative to promote their products. Ray stated that,“Kurt told me that Hohner decided to use their already well-known Auto Valve Harp as ‘an Australian model’ rather than ‘invent’ a new Oz style brand name. Perhaps that was because of the legal problems they encountered when they marketed the Young Australia model? (Playing it safe).”

In 1938 there was a Hohner model only sold in Australia under the banner of ‘Auto Valve’-branded the ‘Auto Valve Vamper’, which could be purchased for three shillings at all good and bad music stores. It was a ten hole twenty reed diatonic model. The name is an oxymoron as the Auto Valve Harp is a Knittlinger instrument and the Vamper a Richter model. I’ll let Pat Missin, world authority on all things relating to the first instrument played in outer space take over, “Vamper is a much-abused term. Strictly speaking, it means a Richter System instrument. Really, at this point we don’t know for sure what Richter did or didn’t do. We’re not even certain who he was. Vamper seems to have become the British-English term for the Richter-style diatonic some time in the late 1800s, although it was also sometimes applied to double-reed harps. Vamper seems to have been the preferred term in the UK, Australia and NZ, but not so much Canada or the US. Also strictly speaking, the Auto-Valve is a Knittlinger System harmonica. So by definition, an Auto-Valve can’t really be a Vamper – not that Hohner let anything like correct terminology get in their way.”

The term ‘Vamping’ and its origin is intriguing for the author. My idea of vamping was a chordal chugging arrangement. Could it/did it evolve from the word Vampire? There is sucking involved in playing! Again I’ll hand over to Pat Missin for his take on vamping, “I have always assumed that the term originated from the ability to vamp chords under a melody, although to be honest, you can do that just as well with a tremolo or octave harp. Also, “vamp” can mean slightly different things in different musical contexts, but most often it means an improvised accompaniment.” I researched further for the etymology and discovered it’s derived from the medieval French word avant-pied which translates to before the foot and was used in reference to the part of a stocking below the ankle. Somewhere in the middle seventeenth century the word was used for anything that had been fixed up (such as hole in a sock). The verb to revamp has its origins here. By the end of the nineteenth century into the musicians vernacular arrived the term vamp for short, simple repeated phrases (usually improvised) that were called a safety. In musical theatre they were originally used for stalling for time so the singer could use dialogue (a patch). Perhaps the origin of today’s looping. In 1933 Harold Collier, Crackajack Mouth Organ representative and Australian champion of 1927 and 1936, wrote two feature articles for the Melbourne newspaper ‘The Age’ on mouth organ playing. In the second instalment he explained the method of vamping under the heading of ‘How To Use The Tongue’. “The tongue is removed from the notes each time you blow and draw, in fact, it should move in and out as quick as a snakes tongue.” (The Age, 7 April 1933). 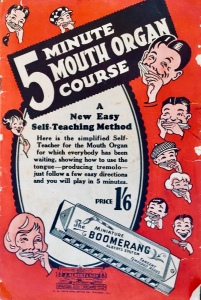 This technique of tongue blocking to play a clean single note was another area of interest for the author. How did it come about? Who developed this unique method? Pat kindly expands on the topic, “The subject tongue blocking and its place in history is something I’ve recently been discussing with Joe Filisko. He is strongly of the opinion that tongue blocking was essentially THE embouchure up until the 1960s, even for those players who rarely played chords. I think he’s right on that point and we are currently trying to figure out how the balance of power shifted towards the pursed lips embouchure.”

In a follow up he provides further detail, “The oldest English language book on playing the modern harmonica is from 1870. It describes tongue blocking as the way to play, although its instructions are rather vague. Interestingly, the instructions for playing the Pandean Aeolian only mention the pursed lips method.”

In Sonny Terry’s ‘Country Blues Harmonica’ (Oak Publications, 1975 p46) book as told to Kent Cooper and Fred Palmer by Sonny, it tells us that Sonny obtains single notes by centering down on one hole by using his lips, claiming it allows him free to do tongue flutters and trill effects. It does suggest you can combine both methods, but basically finishes by stating that you can make the same sound in many different ways.

The Auto Valve Vamper was a fair dinkum Aussie harp, but with the onset of the second world war (sorry I mentioned the war, but I think I may have got away with it) it was gone before it arrived. After the war Hohner would eventually establish itself in the Australian Mouth Organ market with their high quality Chromatics and also the ‘Echo Super Vamper’ (Hohner’s ‘Marine Band’ stamped differently for Australia and UK markets).

The first post war shipment in 1949 that reached the shores of ‘Terres Australis’ included a ten hole vamper mouth organ sold by J Madgwick & Co of Pitt street Sydney as the ‘Echo’. Interestingly Harry Landis’ music store in Elizabeth street Sydney of the same year advertised the twenty eight reed tremolo harp as the super-vamper. By 1952 the ten hole ‘Echo’ vamper transformed into the ‘Echo Super Vamper’ and quickly became a popular acquisition for those looking for a precision vamper. I had always wondered why the twelve hole model that appeared years later in an orange box wasn’t named the ‘Super Vamper’. One would have presumed the larger size would have been superior to the smaller. This model is identical to the Marine Band 364 which became popular after Sonny Boy Williamson II produced amazing sounds from the harp. Not sure why it was marketed this way, perhaps it was due to our predilection for the nomenclature (Vamper), which certainly had a resonance down under and sales would reflect their popularity.

Pat Missin suggests, “When Hohner got seriously into export, they really concentrated on making products aimed at specific regions. Often what was essentially the same harmonica would be marketed under several different names, depending on where they were trying to sell it. The Marine Band was named after the US Marine Band and it probably didn’t make much sense to try and sell one in the UK. Likewise, as Vamper was not a term commonly used to describe diatonic harmonicas in the US, something called the Echo Super Vamper was not probably going to be a big seller in the States.“

PS: Thanks to both Pat Missin and Ray Grieve for the information they provided in this Dawg Blawg.

Hohner harmonica’s are distributed here in Australia by KJ (Kurt Jacob) Music. They are celebrating their 80th year in business. Check out their website .