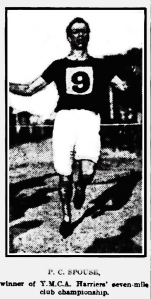 From the outset this is not a drug related account about a cocaine (crack) runner. This article (for track devotees) had been written some time ago to coincide with the Tokyo Olympics and now with the opening ceremony days away, it can finally see the light of day. Running and harmonica playing has a distinguished past. In a previous article we have lauded the feats of sprinter, harmonica player Ray Hogan and even our first national mouth organ champion Percy Spouse was a distinguished long distance runner. Then there’s our crack track Olympian Gerald Backhouse (6 December 1912 – 28 December 1941). 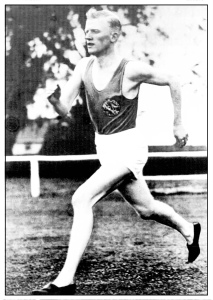 Extroverted middle distance runner Gerald Backhouse, the Blond Tiger from the St. Stephens athletic club here in Melbourne, was not only a mouth organ exponent, but an Olympian, who competed in the infamous Berlin games of 1936. He was one of thirty two representatives from Australia and our only flat runner of five track and field competitors. He not only played the mouth organ, but he used it as part of his training regime to improve his wind. When Gerald initially joined St. Stephens Harriers, his fellow team members spoke more of his prowess with the mouth organ than his track running.

In The Argus, 16th April 1936 Alex Hillhouse (member of the British Empire and Olympic Games teams) outlines Gerald’s rise to fame in world athletics and his unique training methods in doing so.

Gerald Backhouse, distance champion, has been the most remarkable runner in Australia for several years. He will be the only runner in flat races in our team for the Olympic Games in Berlin in August. After mediocre performances he suddenly became a brilliant, undefeated champion only two years ago, although he had been planning through all his school days for the success that he has attained. It was not until he was aged 21 years-he is now aged only 23 years-that he had had more than four victories. At his preparatory school, Adwalton in East Malvern, he enjoyed running and chasing games most. While older boys rode bicycles or travelled by tram, he preferred to run everywhere. He ran In every event at his school sport, but was never able to gain a place. Later he went to Geelong Grammar School, and there he won his first race, a mile handicap, under 15 years, when he was aged 14. He won two other mile races in the following years-a handicap and then the open mile, for which boys was chosen to represent his school in the public schools’ combined sports. Many Victorians will remember the race, in which the small, fair-headed runner came from last in the field 220 yards from the finish to gain victory from the Melbourne Grammar School runner in the last strides. That win for his school the victory of which Gerald is most proud. While, still at school he improved his stamina by long bicycle rides. On excursions throughout the Western Districts on Saturdays he was always one of the keenest riders. I have described before in the columns how, a few years ago, he rode one day from Melbourne to Lorne, more than 100 miles, on his old bicycle io visit friends, had a swim there, and then pedalled back. At Geelong a pedal fell off, so he pushed home the last 50 miles with one leg dangling uselessly. After having left school he ran with St. Stephen’s Harriers in 1931, but ho had no success for several years. He was not disheartened, for he felt that he must not strain himself while young, and that he was preparing for his real athletic life to begin at 21. After two years he gained a third place in the Victorian mile championship. In 1934 he rested from the track because of a foot Injury, and then, with a little training, ran roundly to gain sixth place in the 10 miles cross-country championship in September. In November he began his long series of sensational victories, for on the opening day of the track season he defeated his clubmate, the champion, Fred Coleman, over a mile in the fast time of 4min. 20sec. It was his first victory in an open race, Since then he has seldom been defeated,and now he holds the Victorian half mile and one mile championships, the Australian half-mile title and record, the mile title, and the National Games 1,500 metres title and Australian record. Only a few weeks before his first open victory he had made his famous marathon run from Frankston to East Malvern. Having ridden to Frankston one night on his bicycle in the face of a strong head wind, he decided that as the wind had turned it would be easier to run home. He set out about midnight, and, running all the way, about 20 miles, refusing offers of a lift from motorists, he arrived home less than three and a half hours later. He is a little annoyed because it is said that he does not turn out regularly to train on the track, and that he is a “freak” runner, He says that he trains nearly every day of his life, but according to his own methods. He often runs on the roads at night, and runs when others would be walking or riding. He feels, also, that because of the years of running that he has done in the past he needs less spade work than most other athletes. He runs because he loves running. It is his only sport. He believes in the mental side of his running, in keeping enthusiasms for a sport, and, while concentrating and living for each race, in not worrying about It. Above all, he tries to remember always that he is in the sport for the fun of it.

Gerald’s legendary run from Frankston (where he was partying) was actually a little further out – it was from Mt. Eliza (and don’t forget he would have had to ride up Olivers Hill).

I wonder if he was blowing his ten hole tin can at the party. Due to his bike having punctures to both tyres, he was left with no other alternative than to run back to his home in Canterbury. In his own words, “In my dilemma I thought that I would achieve a double barrelled objective-that of getting home by the fastest and safest means possible, and of having a crack at more than the Marathon distance by running the 30-mile journey from Mt. Eliza outside of Frankston to my home in Canterbury. “So I put on my sandshoes, donned a pair of shorts, and carried my strides under my arm. Setting out shortly after midnight, I did the trip in 3 hrs. 27 min.” (Sporting Globe, 11th January 1936)

In the Olympics of 1936 he finished eighth in the 800-metre final, having qualified sensationally in the semi with an amazing burst to finish second to USA champion Harry Williamson. Gerald had suffered painful shin splints just prior to the meet (ironically because he trained on a cinder track), which would then go on to thwart the rest of his campaign. In the 1500 metre competition he was eliminated in the first round. Two years later at the 1938 Empire Games he returned to form with a gut busting run to win the silver medal in the one mile contest.

During World War II Gerald enlisted in the Royal Australian Air Force serving on attachment. At the outbreak of war, 10 Squadron RAAF was in Britain collecting Sunderland flying boats purchased by the RAAF. The squadron was offered to Britain to serve as part of the Royal Air Force Coastal Command, flying anti‐submarine patrols over the Atlantic Ocean for the duration of the war. Sadly Gerald died in a practice bombing flight in England on the 28 December 1941.

He had held numerous national records in his time, including being the first Australian to break four minutes for 1500m. In the lead up to the Sydney 1938 Commonwealth Games, Gerald defended his national 880 yards and mile national titles – winning silver in the mile on the hallowed turf of the SCG (Sydney Cricket Ground). He was unofficially clocked in the amazing time of 4:12.3 in the mile. A week later in Melbourne he officially broke the national record, running 4:16.8 – a mark that would not be bettered by any Australian for another eleven years. Arguably his greatest performance was in 1936 running the third leg of the 4 x 880 relay for the Empire team against the mighty U.S.A.. Gerald received the baton a long way back, but with an incredible surge finished on equal terms with the great Harry Williamson (U.S.A.). The race was eventually won by the U.S.A in the world record time of 7:35.4/5. The Empire’s time of 7:36 had also broken the previous world record.

In memory of Jim (father) and Wal (uncle) Sheppard fine tiger runners (Richmond Harriers) themselves, who had many a keen battle earning club points against St. Stephen’s Harriers.