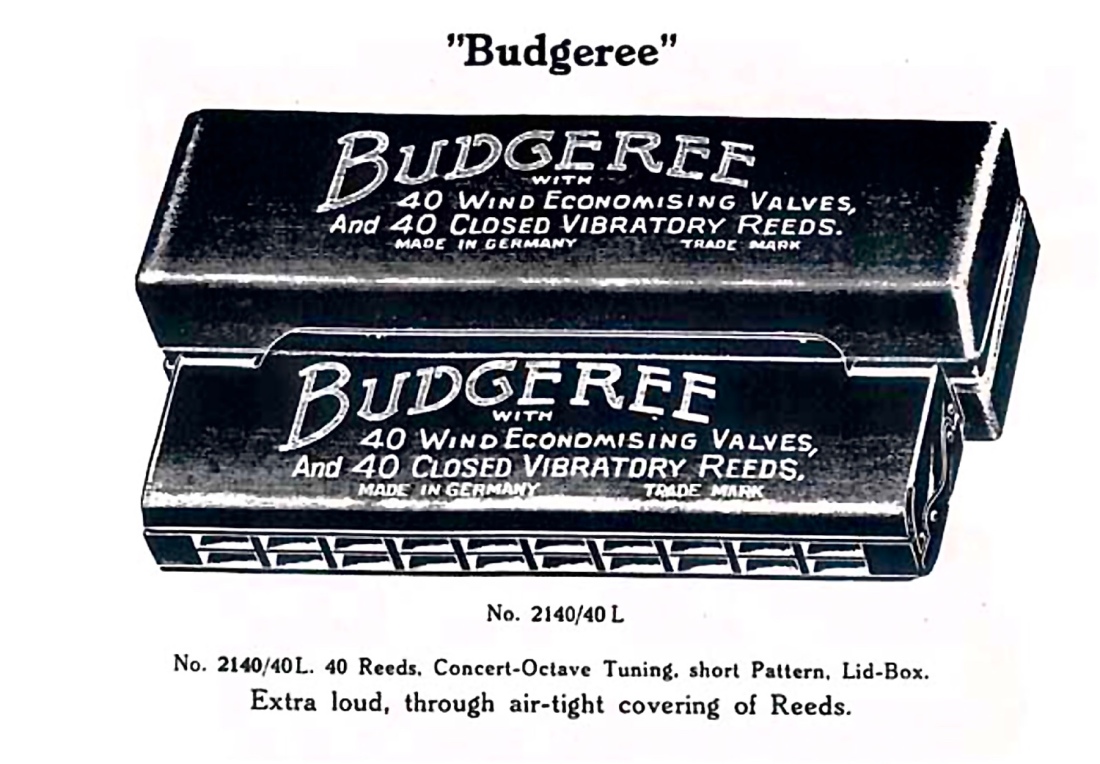 An interestingly named mouth organ that sold Down Under in the 1920’s (I think) is the Budgeree – pictured here in Seydel’s 1923 catalogue. Budgeree is an East Gippsland town (for want of a better description) which is a relatively short journey from our abode. Blink and you’ll miss it as there’s only a few public buildings. Budgeree was settled in 1897 with dairy farming as its primary production. It raises the question: why would Seydel brand a mouth organ after such a place? I presume the model was sold by Albert’s in conjunction with their Boomerang range. My research of Australian newspapers for the mouth organs existence produced negative results which just added more to its intrigue. To my knowledge a physical specimen doesn’t exist.

Perhaps the names derivation was in response to Albert’s earlier success with the Woolloomooloo Warbler – on sale in the colonies in 1896. Woolloomooloo, an eastern inner city suburb of Sydney, is an aboriginal word meaning either place of plenty or black kangaroo. Another Albert’s model The Wallaroo mouth organ may have obtained its moniker from the port town in the Yorke Peninsula of South Australia. But then again, it is more likely to be the animal which is sized somewhere between a wallaby and a kangaroo. The Budgeree harp may have had a connection with a successful confectionary store situated in Oxford street, Sydney. Operating from the late nineteenth century the Budgeree Lolly Coy prided itself on its cold curing lozenges. They advertised their Eucalyptus Lozenges as strong enough to drive a cold out of a block of ice. Their Musk Lozenges they said, had the fragrance that hangs on the lips like the the memory of the first kiss. I would suggest the likelihood of the Lolly Coy as the culprit for the naming of the mouth organ to be highly unlikely.

Another possibility for the naming rights was a popular tune titled, Budgeree Corroboree – A Jolly Australian Song written by flautist George Gethin Park in 1922 ( a year before the Budgeree mouth organ was advertised in a Seydel catalogue). This tune may have been the inspiration for Geoff Mack’s I’ve Been Everywhere. In this 1959 ditty, made popular by Lucky Starr in 1962, many towns are mentioned. In the first chorus of Budgeree Corroboree we sing, Marradong, Dandenong, Humpybong, Wollongong, Budgeree Corroboree (shout Kookaburra) Wodonga, Taronga, come sing the song. The aboriginal meaning for Budgeree is good or good place. Corroboree is an assembly (aboriginal dance ceremony). As you can see, and were probably cognisant of, many Australian place and animal names are taken from the indigenous language. There would be a reasonable defence to suggest that Budgeree was used because of its indigenous (Australiana) meaning.

There was another school of thought that it could be related to our native, colourful parrot the Budgerigar, translated as Budgeree-good and gah-parrot. Bird names were often used as a title for mouth organs due to their connection with making pleasurable sounds.

The Australian branding of mouth organs was used to tap into a nations emerging identity and patriotism. This wasn’t a new marketing ploy in the colonies as the popular clay tobacco pipes had already been promoted in this manner. Scottish manufacturers had an extensive range to cater for overseas markets (Australia included) with decorated slogans, patriotic symbols and caricatures emblazoned on the pipe’s bowl. The clay tobacco pipe (pictured) was called the Squatters Budgeree (1840-65). The distinctive bowl depicts a squatter on an island smoking a pipe on one side and comparatively on the other, two local natives fighting. This short clay pipe called a ‘Cutty’ is missing the stem (they were very fragile) and this is where the brands name would have been inscribed. The Squatters Budgeree is probably the first tobacco pipe specifically branded with the Colonial market in mind. Another pipe available with an Australian flavour was the Wild Colonial Boy. The Wild Colonial Boy was a popular Irish/Australian ballad penned about a bushranger – Jack Doolan was his name and he came from Castlemaine. I highly recommend you have a listen to Dr. Hook’s 1981 version for your aural pleasure. It’s hotter than a firecracker!

There you have it. Take your pick. Personally I favour the indigenous (Australiana) Budgeree and it’s English translation as the probable cause for naming rights. Speaking of Australiana here’s a verse from Austen Tayshus’ 1983 comedy single written by Billy Birmingham.

“I look in the corner and there’s Bass sittin’ there, not getting into it, not getting out of it, I said “What, is Bass Strait or somthin’?” Boomer says “As a matter a fact mate, he’s a cop” I said “Ya jokin’ mate, a cop, I’m getting outta here, lets Goanna.” She said “No way, I’m hangin’ round till Gum leaves. Besides, I don’t wanna leave Jacardanda party on his own. Have you seen him? I think he’s trying to crack on Toowoomba, He’s already tried to Mount Isa And he’ll definitely try to lead you Australiana!”

Before you head off I’ll throw in another ‘Aussie’ harp that appeared in the same 1923 catalogue The Grosvenor. In a previous article Metropole I suggested this harp might have had connections with a prominent hotel in Adelaide. I haven’t found any evidence to the contrary, but after Riff Raffer Mark Hand sent me a photo of his Grosvenor, I had another crack at finding more information on the naming of this Seydel harp.

Not one advertisement located, however an S J Grosvenor with an interest in mouth organs did crop up. He is only mentioned in the year 1925 in relation to his store in Taralga, New South Wales. Again only a small town situated in the Southern Tablelands between Goulburn and Bathurst. His village shop had been asked by Alberts to become selling agents for their Boomerang mouth organs and to coincide with this announcement he organised a competition to be adjudicated by Percy Spouse, who had recently been crowned Australian champion. Percy would also perform the tunes he played at the championships.    Ch EssDawg 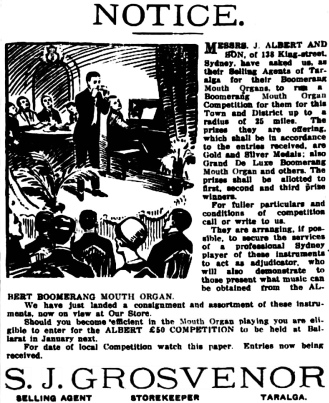