Will the real Sydney Dickens please stand up?

There has been some confusion on the identity of Sydney Dickens or should I say Professor Dickens.

On Melbourne’s Empire Records back in 1908, two wax cylinder recordings were pressed containing mouth organ medleys credited to ‘Professor’ Dickens (these are Australia’s earliest known mouth organ recordings). For your aural pleasure you can hear both medleys at Pat Missin’s wonderful, detailed harmonica site, https://www.patmissin.com/78rpm/78rpm.html. Ray Grieve, eminent and respected Australian Mouth Organ historian, believed from his extensive research (primary and secondary sources) that this was Sydney George Devine (pictured left). This Sydney was born in Bendigo in 1876. His father’s name was Thomas. He was a Dickensian actor who appeared under the stage name Clement May. The Sydney Dickens (pictured right), who I’m talking about here, is a different person. Confusing to say the least! This Sydney is a mouth organ exponent and the inventor of the original Echophone. 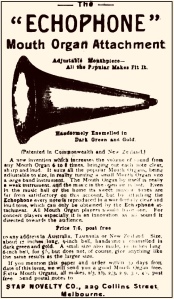 A ‘fair dinkum’ mouth organ amplifier acting like a megaphone, and enamelled in Australia’s colours of green and gold. It was available in two sizes, small (5 1/2 inches long with 6 inch bell) and large (17 inches long with 9 inch bell). All popular (probably those that weren’t popular as well) mouth organs could be attached increasing the volume six to eight fold-allegedly. This Sydney was born in 1884. His father was Simpson Dickens. In an article entitled Carlton Sensation from The Herald in Melbourne on 30th November 1905 his identity was revealed. I’ll reprint the full story below as it is quite an encounter. Thanks to Guru Pat (Missin) a Patent was revealed and is displayed here along with an advertisement of the Echophone reprinted from The Bulletin (Vol. 31 No. 1588 of 21st July, 1910). The address in the patent for the applicant is the same as in the report on the Carlton Sensation. This Sydney Dickens I would suggest is more than likely the one who would play regularly on radio stations and received an honourable mention in the Australian Mouth Organ Championship of 1925 (won by Percy Spouse). The only question left is, who was the Professor Dickens on the Empire Records cylinders? Sydney Dickens, Sydney George Devine (Clement May) or a third unidentified Dickens? What the Dickens? As I write, Ray has been investigating this conundrum and may have new revelations. Over to you Ray. A new book is in production. 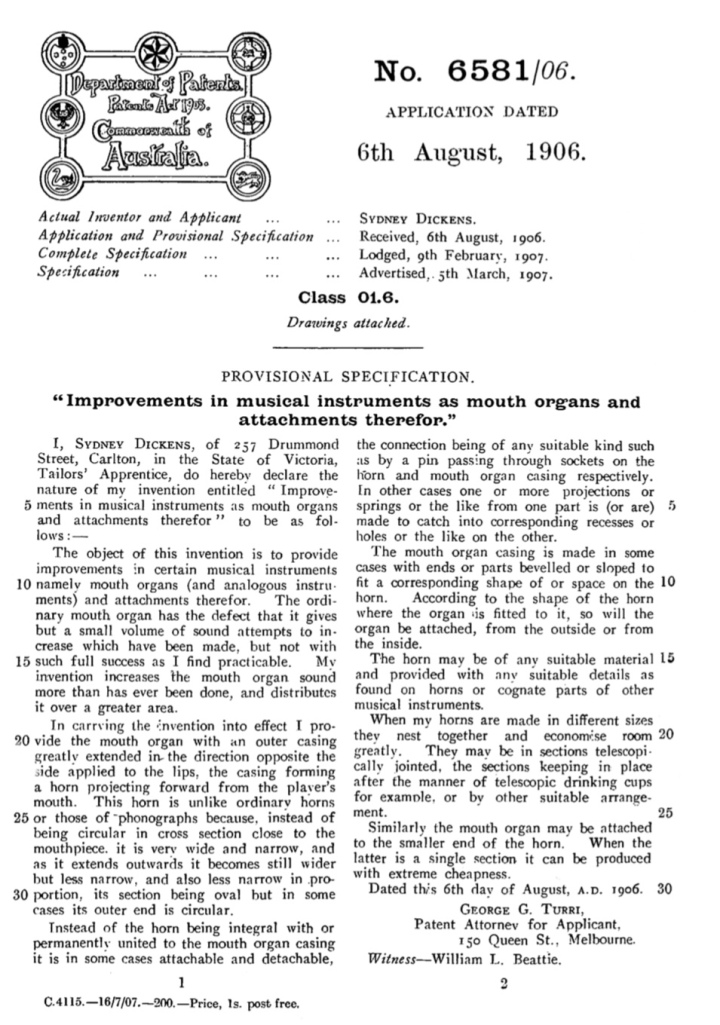 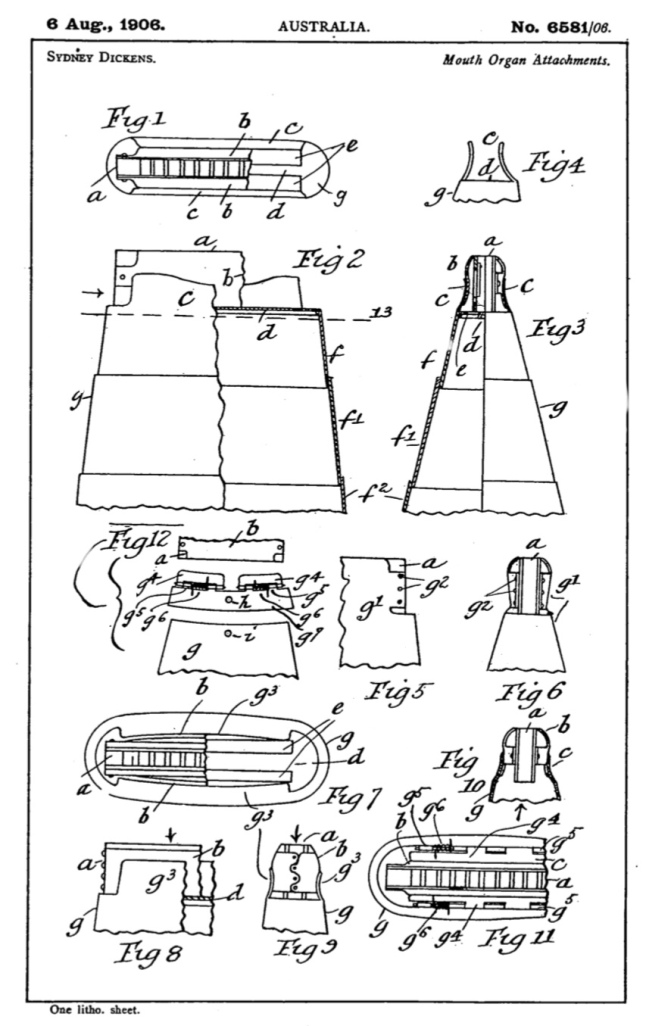 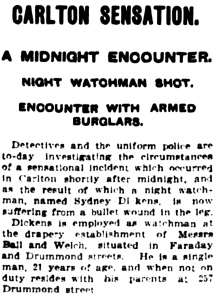 Here’s the rest of the Carlton Sensation report;

Detectives and the uniform police are today investigating the circumstances of a sensational incident which occurred in Carlton shortly after midnight, and as the result of which night watchman, named Sydney Dickens, is now suffering from a bullet wound in the leg. Dickens is employed as watchman at the drapery establishment of Messrs Ball and Welch, situated in Faraday and Drummond streets. He is a single man, 21 years of age, and when not on duty resides with his parents at 257 Drummond street. According to the statement which he made to the police, Dickens was in his sleeping-room, upstairs, between 12 midnight and 12.20 a.m., when he was disturbed by a noise on the ground floor. He was dressed, and, seising a loaded revolver, he went downstairs. On reaching the shop, he could dimly discern the form of a person, towards whom he ran. At that moment there was a bright flash, and the report of a revolver explosion. “I felt a tingling sensation in my left leg,” Dickens continued, “but without waiting to see whether I had been struck. I fired my revolver in the direction from which the shot had come. Then I saw two or three, I’m not sure which, persons in the shop, and fired another shot.” The watchman went on to say that none of the shots appeared to take effect, for on moving forward cautiously he discovered that all the intruders had gone. He found that entrance had been effected by climbing the iron shutter in Faraday entrance, breaking the glass door, and removing the iron bar which secured it. The burglars had apparently escaped by the same way as they had entered. Having secured the place again, Dickens went to his home, and told his father, Mr Simpson Dickens, who went to the local watchhouse and reported the matter. Dr. Wickens was called in and attended to the sufferer, who was found to have a wound in the calf of his leg. A bullet had evidently passed right through. The injury is painful, but is not regarded as serious. Detectives Arthur and Sexton, and plainclothes Constable Campbell were appraised of the occurrence, and entered upon investigations. They found stains of blood on the floor where Dickens had stated he was standing when he was shot, and one of the bullets was recovered. It had evidently come in contact with the wall, and was battered to some extent. A drawer was found to have been pulled out, and ransacked, but nothing was missed from this or from the stock.

In the picture of the 1925 Australian Mouth Organ Championships of South Street Ballarat, I believe (for every drop of rain that falls) that Sydney Dickens is the man circled. Through sophisticated forensic facial recognition techniques I ascertained by my optical lenses that the picture top right of Sydney Dickens was a 95% match on all known indicators for the man circled.

PS: If anyone has a Sydney Dickens’ Echophone please send to the author (I’ll cover postage costs). Thanks to Pat Missin on searching and discovering the Patent for the Echophone and forwarding it to me. Here’s Pat’s take on the discovery of the Patent.

“For about twenty years or so, I’ve had that one on my most wanted list, but old Australian patents are not so well archived as those from some other countries. Anyway, after finding that reference to the Dickens patent, I went and rechecked the citation and noticed that the number they gave just did not seem right when compared with other older Australian patents. For some reason, I did something I’ve never thought of doing in the past two decades –  I prefixed the number with AT instead of AU and bingo. Yup, it was an Austrian patent, not an Australian one!”

A new Harmonica Riff Hits & Bits is out now on Soundcloud. From 1973 Oh Boy by Renee Geyer with legendary Chris Blanchflower blowing the French Harp.