Some time ago I found a couple of early advertisements of a couple of cheaper Crackajack Mouth Organs that were offered in their product range, The Tommy Dodd (1903-06) and the Little Gulliver (1903-12). I cannot conclusively establish how the naming of these was contrived, but I would like to suggest it was of prominent Australians from the era. The Tommy Dodd after an active political socialist, who frequented McNamara’s bookshop in Castlereagh street, Sydney and consorted with the likes of Billy Hughes and Henry Lawson. The Little Gulliver after an actor of the day whose birth name was Johnny Rumbelow. There are other credible options for the Tommy Dodd, which include an old London gambling game that involves tossing coins, an ‘Orstralian’ term for a worn coin that no longer has legal tender and possibly even (or odd) a tune written by Mr. W H Loveday in 1869 titled Tommy Dodd Galop. This was a rearrangement of a comic song based on the coin gambling game, Up in a Ballon by E Clark of St. Louis. “Head or tail I’m safe to win. Hurrah for Tommy Dodd”

It is the authors preference, that a man of the people, a socialist, an agitator, a member of the Active Services Brigade, Tommy Dodd would procure his moniker for the humble, inexpensive proletariat peace pipe (mouth organ).

The Little Gulliver listed here only cost three pence and was significantly smaller in size (maybe a three incher), although still a ten hole twenty reed model. Little Gulliver, the person, was born John Rumbelow in Whitehills, Bendigo in 1876. When fully grown he stood three feet four inches and weighed four stone three pounds. It was said he wasn’t a freak as he was perfectly formed man. The pocket comedian would perform in J C Williamson plays and in Matsa as Onn, King of the Pygmies. It was here he received the moniker, Little Gulliver. One day at rehearsal the stage manager called him, “Hey Gulliver, Little Gulliver.” Johnny responded to the name and it stuck. He was proudly fond of the name. Sadly he died at the age of twenty nine. He was so popular that ten thousand people attended his funeral. 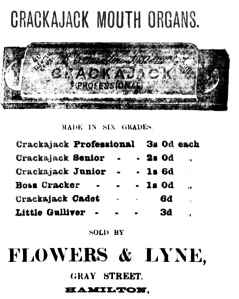 It appears the Tommy Dodd, promoted as the finest little knockabout mouth organ was gone by 1906, perhaps for marketing reasons as Tommy had often found himself in trouble with unscrupulous authorities (although I think this would have been a positive) or it might be they required a model that related to their nautical theme. The Little Gulliver remained on the shelves up until 1912. I put to you readers that these two crackajack characters are likely contenders for the naming rights of these mouth organs. What you reckon?