A look at an Aussie harp from yesteryear, a couple of record reviews and a few bibs and bobs. Don’t forget to visit Harmonica Riff Raff Soundcloud and YouTube for more treats.

In 1909 in Australia Albert’s was selling a unique Boomerang mouth organ with a double cup set of bells attached to the rear of the instrument via an arch with a boomerang shaped bend at the apex. It was a series called the B.A.B-Boomerang Arch Bell models. Pictured is the 40 reeds Professional edition which sold for five shillings and sixpence-there was a mini (20 reeds) of similar structure and a mini double as well. Two other models the 2-sided and the 4-sided (sold for seventeen shillings and sixpence) had one set and two sets of bells respectively, however they were mounted on top. The five versions can be viewed in Ray Grieve’s fabulous books on the mouth organ in Australia (a third is awaiting a publisher). The bells of different pitches would be tuned to the key of the harp and with the use of a lever on either side could be struck by both forefingers in an accompanying rhythm while blowing the tune.

The mouth organs were manufactured by Seydel in Saxony, however the bells would more than likely have been manufactured elsewhere. I don’t believe Seydel made a similar model for other world markets. It looks like the Arch Bell didn’t reappear after World War 1 and I don’t believe any have survived today. The very nature of it’s design found it wanting when withstanding the laws of physics. Even the top mounted bells of the day were fragile and extinction was never far away.

A similar bell structure emerged later on a harmonica made by A A Schlott of Klingenthal on their Lyra brand seen above. The University Chimes (German made-pictured below) sold by Sears Roebuck in America under the brand name of Beaver also had a similar double cup mounted bells, however this was attached on top.

The earliest mention I could find advertised Down Under was a ten hole mouth harmonica with bell, which sold for two shillings and sixpence in Hobart by J Walch and Sons in 1882. The model pictured below was advertised in The Farmer & Settler (Sydney) 18th July 1906 made by Gerbruder Schuster (Schuster Brothers) at Markneukirchen which sold for three shillings.

Ken Leiboff provides a fine demonstration of playing a harmonica with bells on the information highway. See here 🔔.

The bells have told!

PS: A wee bit of Album news. South Australian band Lazy Eye is set to release their sixth album Whiskey & Gin next month and they’re giving it away track by track. You can join the Whisky & Gin Rent Party by reserving a ticket here. It all starts on the 23rd October. A video clip of their fantastic title tune can be viewed here Whisky. 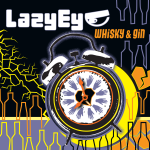 “Just when you thought Lazy Eye had reached their peak they take you over the top with their new album release Whisky & Gin. This is a toe tappin’ finger clickin’ treat. Not only have they put the hip into hypnotizing, but also the groove into groovy. No harp (mouth) but plenty of horn. Lazy Eye have added some herbs and spices to their Blues cookin’ with a three piece horn section and single malt harmonies. Do yourself a flavour and pick this up at all good and bad record stores.”  Shep (Harmonica Riff Raff)

“Every now and then a tune hits you right between the ‘ten speed gears’. Sunshine Coast band Flaskas have achieved this with their latest single Song Bird. Lovingly crafted with a marching rhythm, earthy vocals, singing slide and then when combined with the magic ingredient the ‘ten hole tin can’ Song Bird is elevated to higher realms. They did the Song Bird proud!” Shep (Harmonica Riff Raff) Hear here Song Bird . Out now at all good and bad streaming platforms. 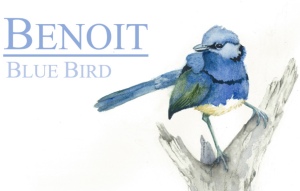 While we’re on the topic of our feathered friends a quick update on Benoit’s fantastic album Blue Bird. His launch will be held at the Selby Folk Club on the 29th of November. The album cover is completed and I must say Lyn’s artwork is superb. Benoit has posted for want of a better word or cliche an interesting video clip of a tune from the album titled Familiar Cliche.

Just another quick one John Whiteman’s fabulous book on Harmonica Box Art is available for purchase here in Oz on eBay. Shame about the postage costs.

Oh, by the way Ken dug up a Cracker Jack relic and posted a pic and a comment on a previous Dawg Blawg #28285.