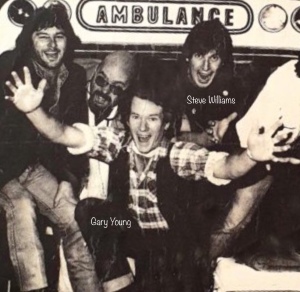 I’m pleased to offer you access to a mighty fine blues tune written by Gary Young of Daddy Cool fame on one of his experiences in Clarksdale, Mississippi. Gary recorded this with good mate Steve Williams (ex Rock Doctors, John Farnham band), who provides the Blues Burger. I’ll let Steve explain the song’s origins, “Shack Up Inn is a 12 bar in A…. it really is in Clarksdale Mississippi and they had a piano in the corner….it was 4 o’clock in the afternoon and there was no one there so they let him have a plonk….Gary can play a convincing Jerry Lee in G and C and he knows hundreds of country and rock n roll songs….before long the ‘Just left work crowd’ wandered in and he had dozens of people buying him drinks for hours…”. Hear here ‘Shack’.

Brisbane Country Rock outfit, Good Will Remedy have just released their seven track EP ‘Witness Mark’. Living up to their name, this album like those before them doesn’t have a bad tune. Recorded live in the studio the vocals were over dubbed later which makes them really pop! AC/DC meets country on ‘Rock n Roll King’. No harp on the extended play, however Will Lebihan, vocalist and bass player told HRR that all the band play the Gob Iron-to some level of expertise. Hear/view their second single ‘Juanita’.

Sydney bluesman Simon Kinny-Lewis has a live album ‘A Day In San Jose’ out now in all good and bad music stores. Several tracks feature the high gain-amped up harp of Andy Just. You may remember Andy from his association with Mark and Robben Ford from the Ford Blues Band. Nice to hear ‘Crossroads’ with harp.

King Gizzard & The Lizard Wizard have another album out in the market place, ‘Fishing For Fishies’. More harp than usual and boogie to boot. Ambrose Kenny-Smith channels his old man (Brod Smith) on the stand out tune ‘This Thing’.

In late breaking news I have obtained another Australian vintage (maybe antique) mouth organ for my ever expanding collection, ‘The Kangaroo’. An article is in the making. Further research has found support for F A Rauner as the manufacturer of the ‘Crackajack’ models and a newly discovered ‘Boy’s Crackajack’ mouth organ sold by ‘Allan’s’. Stay tuned.

A new NFSCD is not far away and a feature article on a Chicago family living in South Australia in the 1930’s.

All for now. Happy Riffin’.