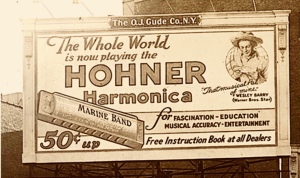 Having determined that collecting vintage/antique harmonicas was confined to my past why did I shell out twenty bucks on another harmonica that didn’t even have its original box. Their worth more in their original packaging.

Freud would say it had something to do with my toilet training, of course he would. It certainly was not as an investment, although I have given my son details on how much I paid and how much I believe my collection is worth for when I pass from this mortal coil. I appreciate that I can’t take them with me. Speaking of the mortal coil, on the flip side it would be great to catch up with Noah, the greatest collector of all time, who had a fetish for two of everything. Knowledge is a double edged sword or should I say a little knowledge is a dangerous thing, or both. Somewhere in my past learning about the age of Hohner harmonicas and through television programs who regularly suggest if you haven’t seen one before you should buy it. I could not contain myself and it was a bargain at twenty dollars. Wasn’t it?

This model is named ‘Up To Date’, patent applied for and the M. Hohner signature appear on one of the cover plates. Apparently Hohner produced more than a dozen ‘Up To Date’ models. I believe it is a twenty hole non-octave harp with a segmented comb. Hohner produced these to take advantage of the belief in the market place that the octave harp had a superior tone. It had the appearance, but not the cost of its octave cousin. The comb is a large block of pear wood or maybe peach, perhaps this could help identify when it was manufactured. The key of ‘D’ is embossed on the cover plate. Is this a clue as embossing is earlier than engraving? With the patent applied for inscription could it be as early as 1895 before the 1896 patent of the Marine Band? Without the ability to carbon date I will set about trying to determine how old the mouth harp is. Information is limited and it won’t be an exact science, but with some ‘nouse’ in regards to the Hohner Trademark I will take a closer look through my magnifying glass. My eyes are not what they used to be.

The reverse plate displays the Hohner Trademark. There is a small six pointed star in the circle. A larger star would mean it was of a later vintage. The star was removed with the rise of the Nazi party in the 1930’s, although it wasn’t the Star Of David. The six points on the star represents Matthias Hohner’s six sons who were running the business at the turn of the twentieth century. It thus pre dates WWII. Another give away of the age was the ‘mouse ears’ or the double tabs on the cover plate where it’s nailed to the comb this clearly makes it before 1925. The ragged sleeve edges of the hands holding the circle date it earlier than WWI when combined with the single circles wrapped around the Wien and Philad medals. I’m not sure if this is applicable for this model as it is with the Marine Band, but there is four nails connecting the reeds to the comb and they don’t appear to be stamped. 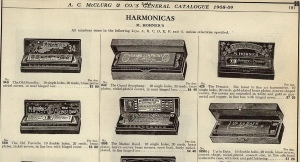 I’m thinking that the harmonica I have collected is somewhere between 1900 and 1910. It means it’s ‘bloody’ old and it’s an antique, being over hundred years old. The harp’s history intrigues me, where has this harmonica been, whose lips have covered the plates and blown life’s breath through the chambers, were they a legend of the game? Before I become too nostalgic, how much is it worth? Still clearly what someone is prepared to pay for it, in my case twenty Australian dollars.

PS: Here’s what Pat Missin believes it may have been. See comments below for further details.