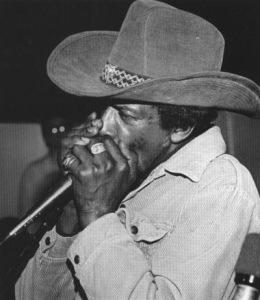 In 2012, Lazy Lester along with good friend Slim Harpo (posthumously) were inducted into the Blues Hall Of Fame. His career commenced rather miraculously after sitting next to Lightnin’ Slim on a bus travelling to Excello studios in 1956. He replaced the hired harmonica player who had failed to show up for the recording session.

Lazy Lester’s harmonica, guitar and vocals can be heard on Excello recordings for both Lightnin’ Slim & Slim Harpo.  He also had his own successful records which included I’m a Lover Not a Fighter, I Hear You Knockin’, and Sugar Coated Love. He is a founding member of the ‘Swamp Blues’ sound on Excello records.

Lazy had an enormous influence on our own Matt Taylor’s harmonica style.

Check out a couple of my favourites from his 1988 album, ‘Harp & Soul’, Bloodstains on the Wall & Alligator Shuffle. Lazy had just appeared on this commercial a couple of months ago https://youtu.be/MNFbmyKqLfI